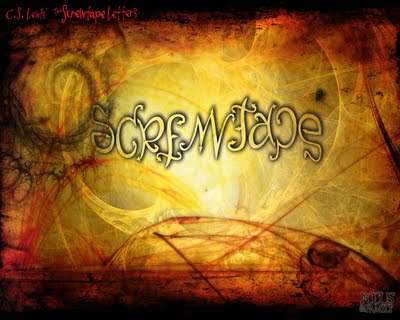 From The Screwtape Letters by C.S. Lewis:

Now I am obliged to write to you about the most uncomfortable subject. At all costs I would wish to avoid even the mention of this matter but it must be broached. I am referring to the Christian holiday known as Easter. As you know it is the celebration of the day when our Enemy above slew death. Oh, what a shock it was to us all that day. I can remember so vividly my reaction the moment it happened! What screams of rage and anger were heard everywhere in our Kingdom Below. How totally helpless we felt at that moment. We were outmaneuvered. Never in a million years could we have imagined that the Enemy would really love those pitiful humans enough to go through with it. He actually died a terrible death to keep them out of our clutches. Why should they be of such worth to Him? We could not understand. But I am getting ahead of myself. Let me take you back to the beginning.

Before the Enemy created these human beings, our Father below was well on his way to becoming Ruler of the Universe. The Christian’s Bible says somewhere that our father was thrown out of heaven by the Enemy, but don’t you believe it. Heaven had gotten to small for him. He decided to go on to bigger and better things. And he wasn’t about to let the Enemy tell him what to do anymore. Our father below knew much better how things should be.

About a third of us went with him. We wanted to better ourselves. We were going with a winner.

Then the Enemy brought into being these human creatures. That was a blow, I’ll tell you. They walked in perfect harmony with him. They did whatever He said. They were completely on His side. All they wanted was to please Him. They lived in this beautiful garden and were perfectly happy. Ugh!!! We could see the handwriting on the wall. Pretty soon the whole earth would be full of them.

But our father below devised a plan. He disguised himself and snuck into their garden one day. In his clever way he convinced them that there was something better than pleasing the Enemy. They could become their own god. They could be in charge, be the boss of their own life. Why obey him? There is so much more to life than that? It is so foolish to let the Enemy be your God, he told them. Think what you will miss if you stay with Him. I will give you a higher wisdom, he promised.

(Have you noticed that our father below is still using this approach very effectively today. Those humans are so impressed with their own wisdom now. You can get them to believe almost anything. They will absolutely destroy themselves now rather than accept the authority of the Enemy above. They are such a stupid bunch of mortals.)

Anyway, as I was saying, our father below convinced them to disobey their Creator. He told them, “go ahead and do it, you will not die.” (a little lie there, he’s an expert at that all right.) He knew that is exactly what would happen. And then those feeble earthlings would be in our clutches.

They disobey their Creator, rebel against him, and then they become ours. Their Creator can’t keep them because He can’t have in His presence anyone that isn’t pure and holy. He is so narrow. He insists on only what is good. That doesn’t leave any room for all the bad out there.

Well, the humans fell for it. They got suckered into our camp. And immediately they started to die.

And ever since, death has been our great ally. Do you know how many millions we bring into Hell every year through death? It is one of our few pleasures. How delicious to see them suffer! They feel such loss and pain when their loved ones die. Death was the great triumph of our father below.

I say “was” because the Enemy changed all that.

The first thing he did was to lower himself and be born as one of “them.” We almost got him killed when he was a baby. But he eluded us then. He grew up to be a man. He taught those poor humans about himself, all the while not really spreading around who he was. Then one day he gave himself up to be killed by a bunch of jealous religious leaders. We figured it was a big bluff. Just an excuse to perform a public miracle and escape at the last minute. But he actually went through with it. He let them nail him to a cross and he died. We all thought, “Aha, you’re beaten now! You’ve just made your big mistake!”

All of us were feeling, for a few hours, a big relief from that constant fear we had always felt toward the Enemy. Maybe all those prophecies about our last judgement would never happen after all. Death had claimed the Creator of life. Finally our Lord Satan would be undisputed ruler of all.

Then Sunday morning came. The Enemy reappeared. Suddenly, he was alive. Death could not hold him. But it was even worse than that. He had become an innocent sacrifice for the sins of all those humans. He had paid their penalty. He had died in their place. Now death could not hold them either. They could be forgiven and reunited with the Enemy. They can now live forever. For all practical purposes, death has died. There has never been a more disastrous day in the history of the universe.

That, my dear Wormwood, is the whole sad truth.

There is only one thing we can do. We must redouble our efforts. We must do everything we can to make sure that these humans do not believe in Jesus. And if they do believe then make them lukewarm and too busy with other things to be of any use to him.

We have some reason to hope. Much of the media help us. And there is such a climate of pleasure-seeking and materialism that often the Christians aren’t any different from anybody else. Many Christians are uncommitted. Some are hypocrites. And we have got many sincere people convinced they are so guilty that they have no hope. Others are bitter and have closed their ears to the message of the Ressurection. Others are just self-satisfied and only care about now.

We have laid some very good groundwork intellectually. Many educated people have been kept from considering both sides and are firmly convinced that there is no intellectual basis for believing in Jesus. They don’t know what we know and we are not about to tell them. Many of these people are even convinced that we don’t exist! That’s very good! In closing, I will just say, “Fight on, Wormwood. I fear we will lose in the end, but let us take as many of them with us as we can. Their willful, selfish part of them gives us much fertile ground to cultivate. We may have lost the war, but let’s go out and win some battles for our father below.